Hi! I'm Julie and I love taking photos and creating dishes. Like any southern gal, I started cooking at an early age. I would stand with my mom in the kitchen and watch her throw dishes together. Today, I have her old cookbooks and some recipes from around the web that I try out from time to time.

I'm adding to this collection as I go, but for now I've featured a few recipes that were hits. If it doesn't create a mess, it probably wasn't a hit, so be warned. If you have any questions, use the contact form below. 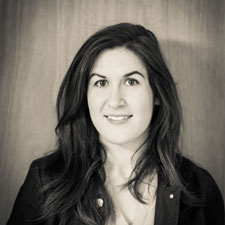 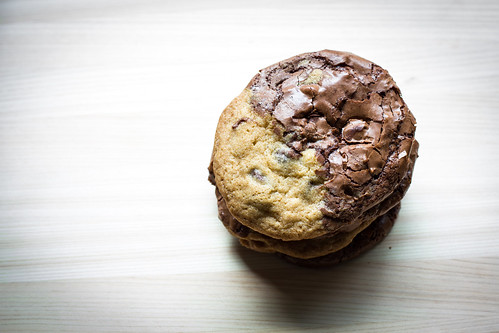 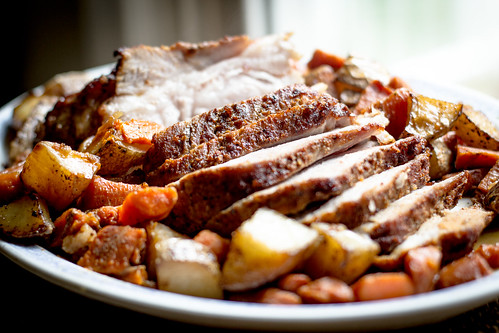 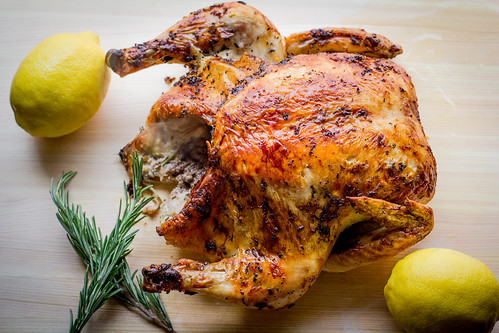 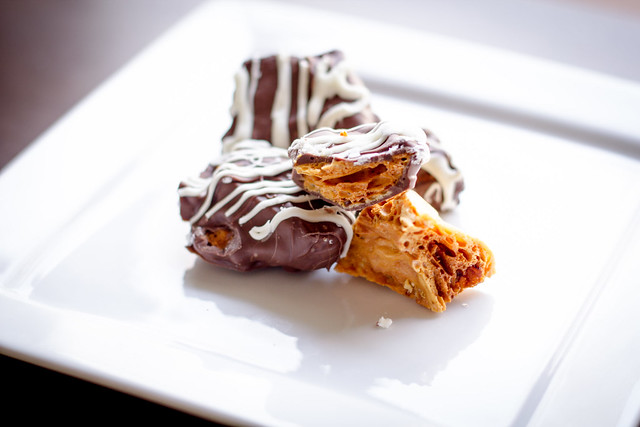 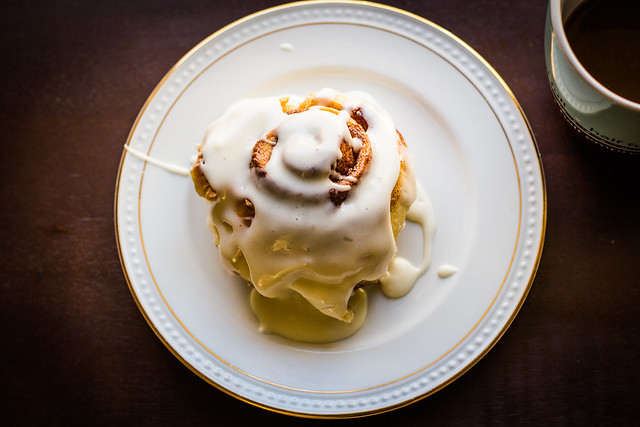 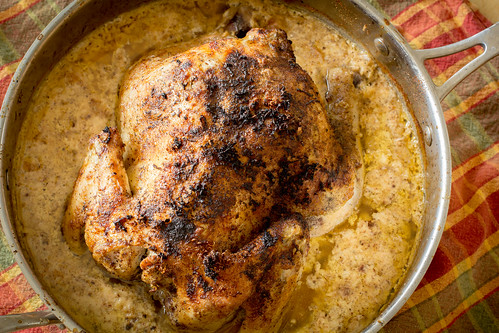 Brownies and Cookies, the best of both worlds. I created this recipe when I was trying to find a good birthday dessert for my brother. He loves chocolate, even though he's in severe denail about it. After searching Pinterest for a while, I deduced that I wanted my brownie part to have that crinkle texture of a good pan of brownies, and I wanted the chocolate chip side to be like my grandma's. After calling her, I was surprised to discovered she used the Nestle recipe for chocolate chip cookies. There ya have it. The cookies I thought were some sort of secret recipe growing up turned out to be the Nestle cookie recipe. 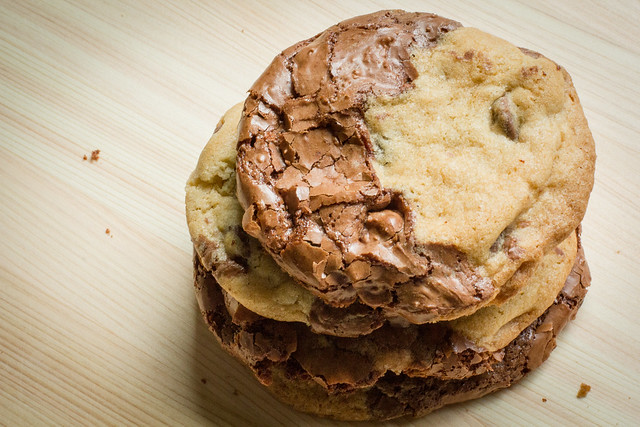 The recipe goes as follows. Make the two recipes above, but keep the batters separate. Form the dough into teaspoon sized balls. If the batter is too sticky, put it in the fridge for a while to chill it, which makes the dough so much more workable (Hint, this works great if you ever make truffles). After you've made the balls, grab one of each and press them together and gently form them into a cookie shape. Then, flatten the cookie some before baking for 8-10 minutes at 350 degrees.

Coming up with new ideas for dinner becomes a challenge, especially with a picky husband. We don't eat a lot of beef, usually sticking to chicken and turkey. So when I decided to make a pork loin, I knew it had to be good.

The recipe uses a pre-seasoned pork loin from Smithfield that you can find in any grocery store meat department. It also contains the recipe for a garlic gravy that is honestly amazing. The roasted veggies are probably my favorite, to be honest. I love a good roasted potato, carrot, or any root vegetable. 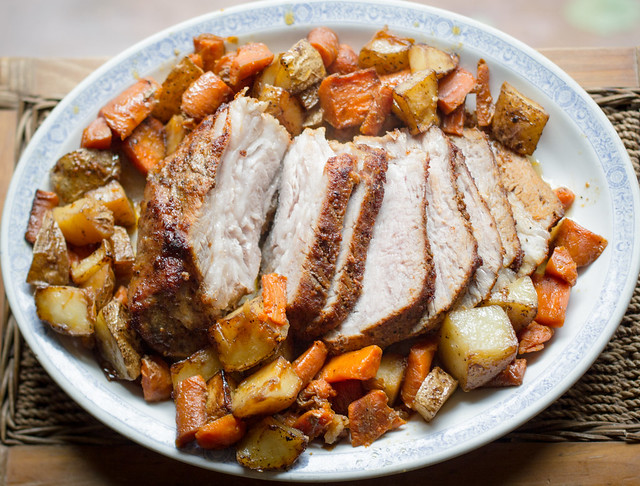 The basics of this recipe are to toss any veggies you want in olive oil and seasoning, spread those in the pan. Put the pork in, finish spreading veggies around the pork. Roast for 30 minutes covered, then continue roasting for 45 minutes. After you test to make sure the roast is 160 degrees, put some butter on it and let it rest for about 15 minutes. This makes it super moist. 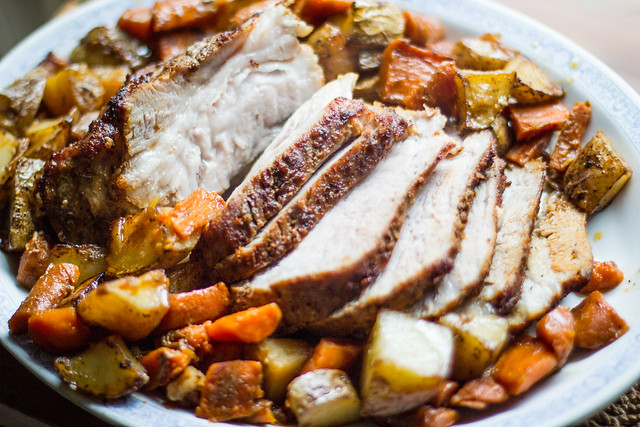 Whenever I search for recipes, I admit to searching The Pioneer Woman. Her opinion is amazing and her recipes have literally never failed me. So when I saw her recipe pop up in a roast chicken forum, I knew I needed to try it. Off the the store I went to gather ingredients. Once again, a cheap chicken was procured, as well as rosemary, lemon, and butter. 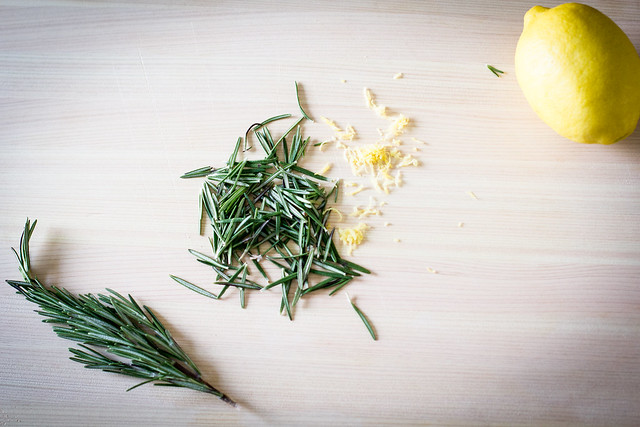 The basics of this recipe include zesting lemons, chopping fresh rosemary, and combining them with butter. You rub the chicken all over with the butter (after salt and peppering it). Smear it good! Place the lemon halves inside and stuff the rosemary leaves inside. Bake at 425 for an hour and 15 minutes. Carve it up and it's delicious! 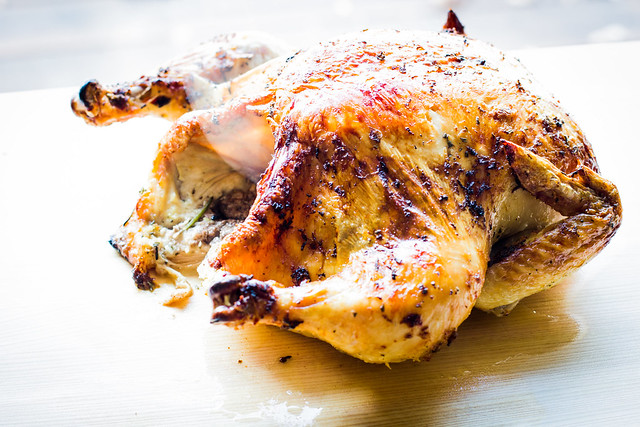 My husband spent part of his childhood in Papua New Guinea. He told me about things they used to eat, and one treat they would get were these candy bars called Violet Crumbles. They're like honeycomb covered in chocolate. After searching around our home, I discovered they're no longer sold around here.

So, I set out to make them. After jumping from recipe to recipe, I discovered I had all the ingredients on hand. Corn syrup, honey, sugar, baking soda. Milk chocolate and some white chocolate were a necessity, of course.

The basics of this recipe are to line a 9x13 pan with wax paper or aluminum foil. Do you want to never get the candy out of the dish? Remember that step. Combine honey, corn syrup, and sugar in a pot and make it a BIG pot. It will quadruple in size. Make sure there are no dry patches of sugar. High heat until the mixture reaches 300 degrees. DO NOT STIR. It will be a light amber color. After it's reached 300 degrees, remove from heat and add in the baking soda and whisk like your life depended on it. Science happens. Pour into pan and let it cool. Break apart and dip in chocolate. 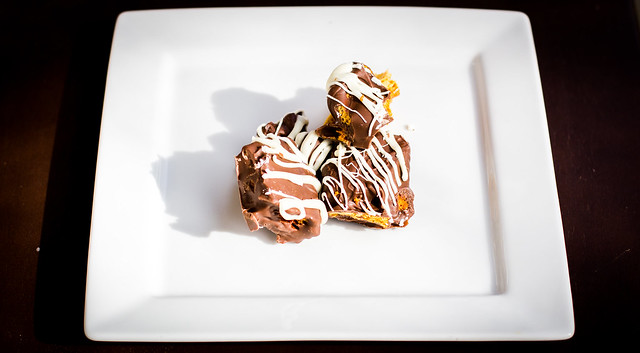 I had heard of these and even caught them on the Food Network. So, for our first wedding anniversary, I thought I'd make a fancy breakfast. Enter: Alton Brown's Overnight Cinnamon Rolls.

This is definitely not an easy recipe. It requires yeast, letting things rise, and confidence. I think I watched the video of how to make these a few hundred times. 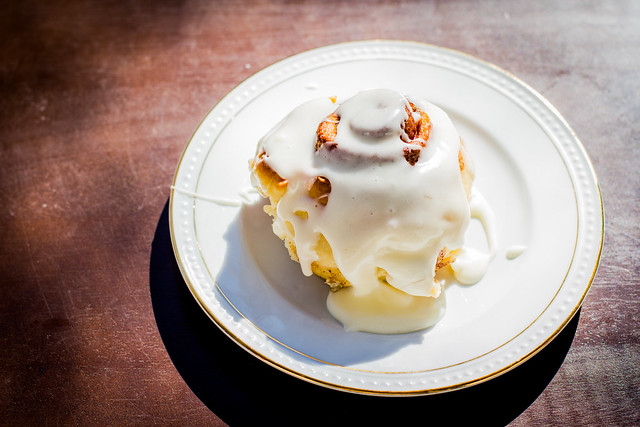 The basics of this recipe includes mixing the ingredients and kneading for a while. Getting the dough just right, then letting it rise/double in volume for over 2 hours. After that, rolling out the dough, spreading the cinnamon mixture, and creating your roll. After slicing, you refrigerate for up to 16 hours and bake them the next morning. 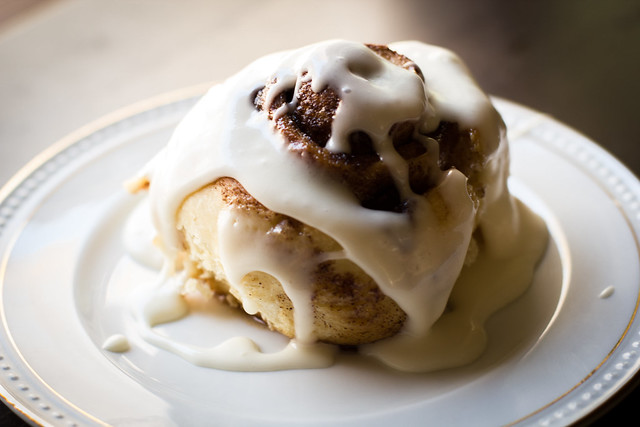 So, I've been on a chicken kick lately. I only buy them when I find them on sale, and my rule is to buy them if I can get them for less than $5. Why this much? Becuase a roatisserie chicken from Walmart is $4.98, and it's already made. No brainer. However, I've found these to not be great quality, and we don't get a lot of great tasting meat for us, most of the meat goes to the pups.

I got this chicken for right under $5, and had all of the other ingredients on hand. I was going to make Pioneer Woman's Lemon Rosemary chicken, but found out my rosemary was moldy. Last min decision and quick inventory of my ingredients, and I decided to go for Jamie Oliver's Milk Chicken. 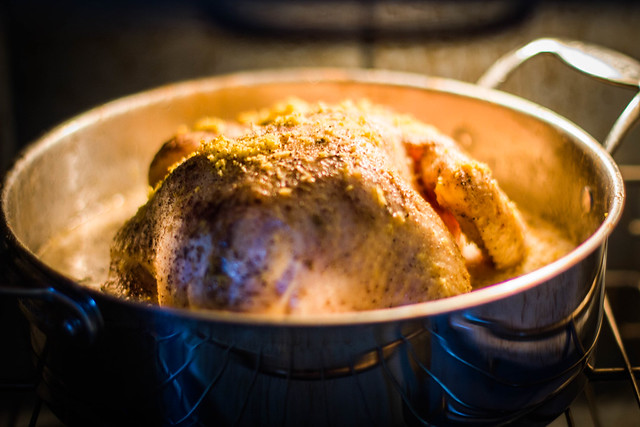 The basics of this recipe include browning a chicken in a pan with a lot of butter/oil after seasoning it with salt and pepper inside and out. Adding milk, cinnamon, lemon zest, and shoving some lemon in the chicken. I usually squeeze a lemon from the zesting all over as well. Bake it in a 350 degree oven for 90 minutes. Also, make sure you have a pan that can be put on the stove as well as in an oven. A dutch oven would be great but don't make the mistake I did. 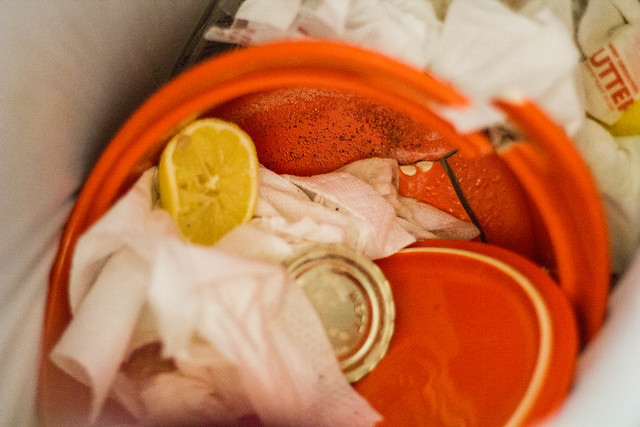 I also didn't have cinnamon sticks or fresh sage, so I used ground cinnamon and rubbed sage. They worked great and the chicken was delicious!